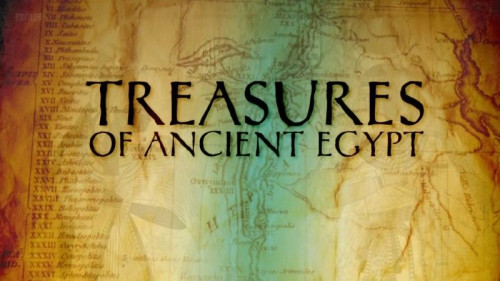 Ch1. The Birth of Art
Tracing the origins of Egypt's unique visual style, he treks across the Sahara and travels the Nile to find the rarely seen art of its earliest peoples. Exploring how this civilisation's art reflected its religion, he looks anew at the Great Pyramid, and the statuary and painting of the Old Kingdom. Sooke is amazed by the technical prowess of ancient artists whose skills confound contemporary craftsmen.

Ch2. The Golden Age
On a journey through Ancient Egyptian art, Alastair Sooke picks treasures from its most opulent and glittering moment. Starting with troubling psychological portraits of tyrant king Senwosret III and ending with the golden mask of boy king Tutankhamun, Sooke also explores architectural wonders, exquisite tombs and a lost city - site of the greatest artistic revolution in Egypt's history where a new sinuous style was born under King Akhenaten and Queen Nefertiti. Along the way Egyptologists and artists reveal that the golden veneer conceals a touching humanity.

Ch3. A New Dawn
Alastair Sooke concludes the epic story of Egyptian art by looking at how, despite political decline, the final era of the Egyptian Empire saw its art enjoy revival and rebirth. From the colossal statues of Rameses II that proclaimed the pharaoh's power to the final flourishes under Queen Cleopatra, Sooke discovers that the subsequent invasions by foreign rulers, from the Nubians and Alexander the Great to the Romans, produced a new hybrid art full of surprise. He also unearths a seam of astonishing satirical work, produced by ordinary men, that continues to inspire Egypt's graffiti artists today.