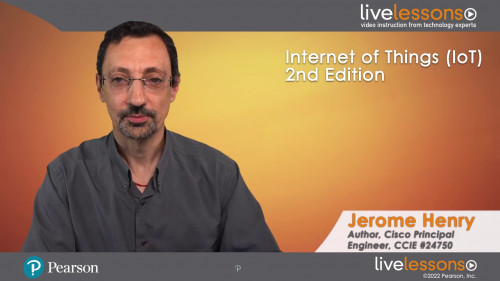 Overview
The Internet of Things (IoT) is rapidly gaining popularity worldwide and is becoming one of the most important drivers for digital transformation. It is an important topic demanded by various markets, including networking, cloud, DevOps, security, and more. Internet of Things (IoT) LiveLessons, 2nd Edition introduces you to the technical foundations of IoT, from the sensors and actuators, through secure IoT network access technologies, all the way to the core aspects of big data analytics and machine learning. It also covers the key components of an IoT network and details how various IoT cloud platforms like Azure IoT Hub and AWS IoT Core support their IoT projects.

Taught by experienced Cisco IoT experts Robert Barton and Jerome Henry, the course teaches you the basics but also the knowledge and the skills to start an IoT project that incorporates the key business drivers that make IoT an important area of technology. Internet of Things (IoT) LiveLessons, 2nd Edition is organized into 14 lessons that include several demos and many real-world deployment examples and case studies that the instructors have personally led.

Learn How To
* Plan, organize, build, and deploy end-to-end IoT solutions
* Navigate today's IoT product marketplace
* Manage IoT projects with cloud-based solutions
* Set up your Raspberry Pi to kickstart an IoT project
* Use maturing IoT technologies to solve many business and technical problems
* Make sense of the full IoT protocol stack, including wired and wireless technologies and the management protocols that make IoT work
* Understand the world of operational technology (OT) and how it intersects with IT
* Architect IoT networks for maximum security and integrity
* Generate meaningful intelligence from the data your smart objects capture
* Move data from the IoT edge to popular cloud-based IoT services, such as AWS and Azure
* Plan out an IoT project by working through cross-functional teams


Who Should Take This Course
This course is applicable to anyone in IT and OT (operational technology), including people in network administration, cloud operations, DevOps, and security operations roles.

| The Sneak Peek program provides early access to Pearson video
| products and is exclusively available to Safari subscribers
| Content for titles in this program is made available throughout
| the development cycle, so products may not be complete, edited, or
| finalized, including video post-production editing
|
| Sneak peek vs. Non Sneak peek
| no difference, mostly only available earlier! ... have phun!
|
|